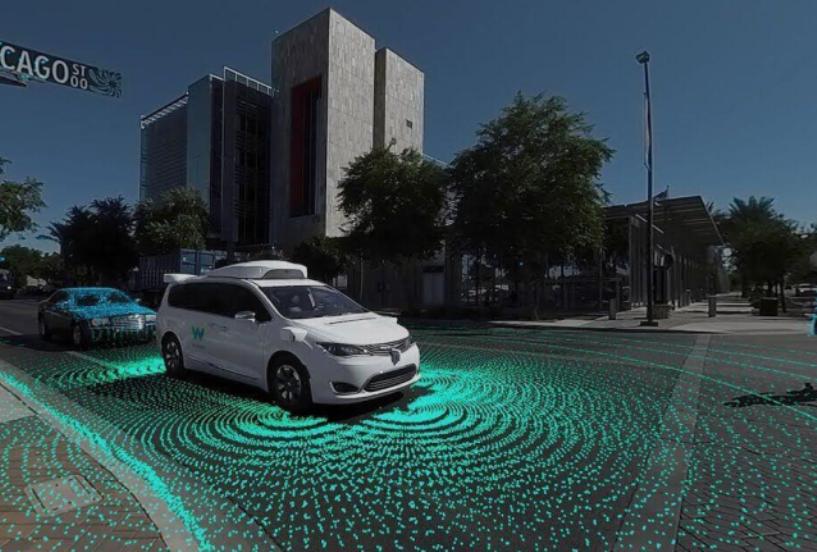 About Waymo Self Driving Cars 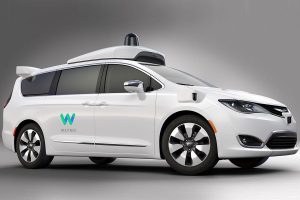 Waymo is a project of Google who makes cars which can be drive automatically without any driver. This is a very unique concept that car will drive automatically. Waymo is a secondary company of Google. This was a biggest mission for Waymo Company that they want to make a Google driverless car. In 2009 Google started to test for self driving car. This mission of Waymo self-driving car is successful at may 2018 when Waymo announce that now people can ride in Google driverless cars. This is a biggest achievement for Google and Waymo. Waymo self driving cars are looks like a normal car. It has a biggest functionality that it can be drive itself. Now Waymo is confident about its technology of self driving cars.  Google revealed this car in a event of Google IO.  Google launches its  all products during Google IO. It has some buttons for handle the functionality of car. If car is going for wrong then the traveler presses a button of “pull over” to stop the car. This is completely a software based car which drives by using artificial intelligence.  Six million miles simulations are performed by the google for Waymo self driving cars. And five billion miles simulations are performed by computer in different conditions. Thus the final product is the car which is driverless.

This is a very interesting concept of self driving cars. A machine can do perfect work as compare to human. A human can be tired but machine can’t. So it can do work perfect, more batter and more reliably as compare to human. But this is a very interesting thing for us to know about that how Waymo cars actually work. Machine learning is used in this Waymo Self driving Cars. But as we know that machine learning has some limits. If a different task comes for this car which is not defined in its program then it doesn’t work. This time the person will drive the car. Thus many person doesn’t trust in self driving cars.


History of Waymo Self Driving Cars


About Waymo Self Driving Cars

Most of the person wants to know that how Waymo car works. Here I describe about this car that how it actually works in real life. So if you are interested in learn about the working strategy of this car then you should read this article till end. I am describing it below. 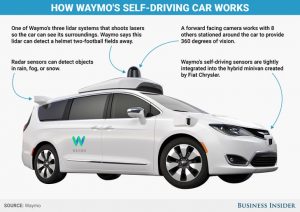 As you can see in the top of the van, there is a rectangular section at the bottom of the camera. It is RADAR. These types of RADARs are also available in the every corner of the van. You can see it in every corner of the van. It has total six RADARs. These RADARs works for know about the objects like distance of the object and the movement of the object. So the artificial intelligence also takes help of RADARs to know about the correct position of the object. These rectangular sections around the van are called as RADAR. Thus RADARs helpful for Waymo Self Driving Cars.

If the van want to know that which kind of things are available around the car then it uses the LIDARs. Waymo self driving car has four LIDARs. First one is at the front of the van, second is at the back of the van and third and fourth is in the both sides of the van. All LIDAR’s are spinning in very speed.

Know About Inside of Waymo Self Driving Cars 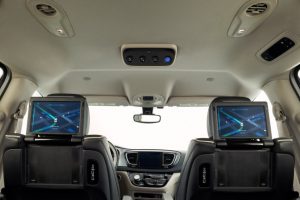 So this is the complete scenario of this car. I hope, you got useful information about inside of the car. You can see it in the picture of the car that how all functions are situated in the car.


Sensors of Self Driving Cars 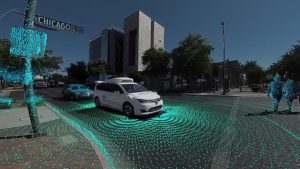 If we talk about self driving cars then it has six types of sensors available. First sensor is LIDAR, second sensor is RADAR, third sensor is SONAR, fourth sensor is mono vision camera, fifth sensor is known as GPS unit, sixth sensor is known as accelerometer sensor. Full name of LIDAR is Light Detection and Ranging. LIDAR creates a kind of light which is known as laser light. Laser light reflect from anything which comes in its way. Thus LIDAR learn about the distance of anything. LIDAR creates a 3D image of environment. Thus car know about the accurate position of the car. LIDAR works under 100 feet. Now we talk about RADAR. Full name of RADAR is Radio Detection and Ranging. It uses radio wave to find any object around the car. RADAR works under 650 feet. Third sensor is SONAR. Full name of SONAR is Sound Navigation and Ranging. It is a SONAR system. It uses the sound wave to find an object around the car. Waves reflect from any object. Thus car learn about the position of object. SONAR system works under 25 feet. Fourth sensor is mono vision camera. The resolution of the picture which is taken by this camera may like a human eye. It can identify easily the signboards. Fifth sensor is GPS unit. Full name of GPS is Global Position System. It defines the route for self driving car. Sixth sensor is accelerometer. It uses for the speed maintenance.

Is Self Driving Cars Replace the Human Driving

As we know that which our human mind is much batter as compare to a machine. Because machine can’t think more than its program. If we drive a car then we know that which the right thing is for us. And how can we choose a right way for us. In many times we are in a lot of traffic then we know that what is right way for us. But if we talk about self driving cars then it has many cameras, many sensors who collects the information about the environment and sends information to the computer of car then computer decides that which the right way for car is. This computer also decides that what should speed of the car. Here is not any doubt about the computers. All computers are very fast processing power as compare to human. The cameras can see very sharply around the car. But the common sense is missing in the computer system. Our artificial intelligence is not stronger in this field. So we can’t think that self driving cars can drive much batter as compare to human. Definitely we can say that in some cases self driving cars can do much better as compare to human.

According to a research of University of California self driving cars read the instructions of signboards, light signal etc. and take action. But if anybody keeps changes in signboards then car can’t able to read that instruction. Example a board of stop sign is situated but if a person write any other things as you can see in the picture below. Then self driving car can’t read it or car can learn any other meaning of that signboard. So here computer can’t understand the modified signboards. But if a human drive a car then he can understand the modified signboards.

Competitors of Waymo Self Driving Cars

Waymo has also a lot of completion in this field. Uber, Tesla, Mercedes Benz etc. are the competitors of Waymo. Self driving cars will have very huge crowd in future. All automobile companies want to make a self driving car. Here all the companies come like Toyota, Hyundai, Audi, TATA etc. Uber is also ready for launching its self driving car. Waymo and Ubere were involved in a legal battle over the accusation that an ex employee of Google stole 14000 files of waymo and sell it to Uber. Those files are all about customer leader circuit board of Waymo. The name of that employee is Anthony Levandowski. Employee Anthony Levandowski was founder of a autonomous truck company which named is Otto. Otto Company bought by Uber. In Feb 9, 2018 Waymo and Uber announced for settlement.

So here you got all information about Waymo Self Driving Cars.  Now you know that how Waymo car works, which kinds of sensors are available in this car and many more. Waymo has a very interesting concept of driverless car. Waymo starts testing of self driving cars in many places. Most of the testing rides are successful. So now we can ride on Waymo Self driving cars. Because it uses machine learning for so it can do all works. But it is not accurate as compare to human thinking. It is not able to take right decisions in several conditions like if a signboard is damaged or it has any type of other text. So we can say that self driving cars can’t replace human driving. In such conditions self driving cars can do better as compared to human like it never tired while a human can be tired. 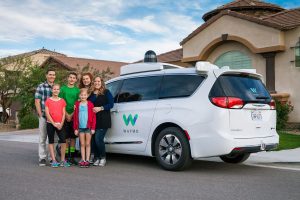 Thank you for read this article till end. Hope it may helpful information for you to know about Waymo self-driving cars. If you have any queries or you want to share your thoughts then you can do comment below.

5 Crazy Myths About Affiliate Marketing You Need To Know About